I think it was the hottest day this year so far. But for other reasons the launch of Sleeping with Rivers on 7 June 2014 was full of warmth. I had the pleasure of reading from my new little book with some of the most respected poets in the UK who also had a great influence on me as teachers: Mimi, Roddy and Pascale.

Mimi Khalvati is my incredible, wise and knowledgeable mentor – the best I could wish for! I’ve done many of Roddy Lumsden’s workshops, he’s introduced me to many poets and I’ve taken part in some of his inspiring themed events – some of the poems in Sleeping with Rivers were written for Roddy’s events including ‘The Drake’ which Seren poetry editor Amy Wack said is her favourite poem of mine. Other poems in Sleeping with Rivers were written in Pascale Petit’s classes,  including the poem with the same name as the title of the collection!

It was a treat to hear new works from all three and to read my own work alongside them. Also to acknowledge that we only get somewhere with the support and encouragement of others. I feel truly blessed to have such a rich and supportive poetry community.

Now, we’re already thinking of a re-print as stock is running really low!  Only a few left: 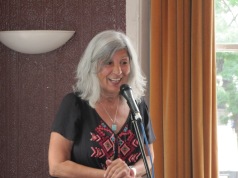 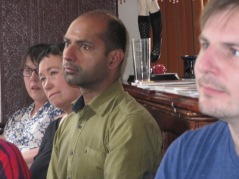 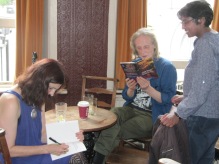